Singing in The Music Room, Heaton Hall (It’s a Grade I listed, neoclassical 18th-century country house, by the way!)

1.30pm and 2.30pm: The Friends of Heaton Hall present the Manchester Community Choir in the Music Room, Heaton Hall. Performances last approx. 30-45 minutes, limited to 50 places per session, no charge but booking required through the Heaton Park feedback form.

See here for information about what else is happening on the day.

Archives+ and Central Library hosted an afternoon of festive activities including musical performances. Father Christmas attended and there were be crafts and family activities throughout the afternoon.
There was a selection of festive archives and special collections available with a specialist on hand to answer all your questions. There were also free mince pies.

Winter Concert in aid of Freedom from Torture 4th Dec 2014

Join FFT for their annual Winter Concert at St Werburgh’s Church, Wilbraham Rd, Chorlton, an evening of light music including choral works, instrumental favourites and Christmas Classics.
The evening will include music from pianist Matt Whitham, the soprano Celia McGoldrick, the Bernstein Clarinet Quintet, and a performance from The Manchester College Choir . FFT are delighted this year to also be joined by the Manchester Community Choir.

Tickets can be purchased from the FFT website or on the door. For more information contact Alice on 0161 236 5744 or anicolay at freedomfromtorture.org

The Stone Flowers were performing in Albert Square.
Stone Flowers is a music project which began in 2011, led by Musicians without Borders, working with survivors of torture at our North West centre.
The choir supported this project by singing at 2pm and 4pm on stage in Albert Square.
It also happened to be the Manchester Food and Drink Festival, so there was plenty going on in Albert Square on Sunday.

A wonderful weekend of music and singing –

Starting with Friday night: Concerts by Seize the Day (plus Red Hippo), and O’Hooley and Tiddow (plus Deep C Divas);

Finishing on Sunday: Workshops and mass picnic/get together

The choir sang in Albert Square, Manchester at 12.15 and 1pm

Organisers Walk The Plank had this to say about the event as a whole:

“This year’s Manchester Day brought a hint of the tropical to the city centre as our theme Going Global saw us travel across the continents, under the sea and everywhere in between. Record crowds filled the streets and squares with over 75,000 people joining us from across the region for a day which was jam-packed with entertainment and activities.

This year saw a new programme of events surrounding the annual Manchester DayParade, with performance taking place in four central squares: Albert, St Ann’s, Great Northern and Exchange. Alongside the creative costumes and impressive makes which wound their way through the city, the squares played host to a human board game, a safari animal dance-off and a team of Italian Sbandieratori (flag-throwers).” 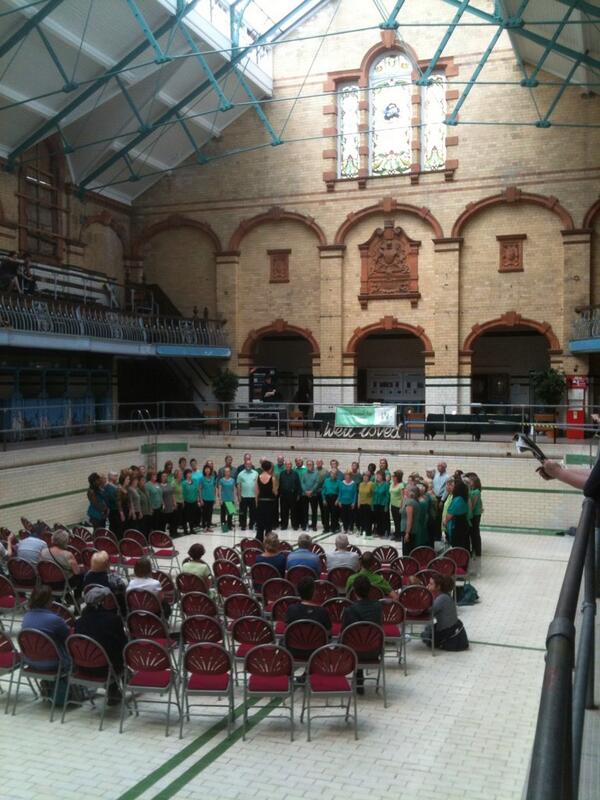 The choir sang a couple of sets at the June Victoria Baths Open Day where a Book and Collectibles sale was taking place. As usual we made a great sound singing to a great audience ‘in the deep end’, and thoroughly enjoyed ourselves.

One of our members commented “My daughter and her boyfriend were there for the first set. They said we sounded really good, Durme in particular was fantastic according to both of them! The tune was being hummed by the whole household by the end of yesterday evening!”

And a potential new member contacted us to say “I saw your choir today at Victoria Baths and I really enjoyed the concert, I’d love to come and sing with you!”

8pm to 9.30pm at St Werburgh’s Church
Entrance £5 (£3 concessions).
Singing for Pleasure : Manchester Community Choir and Guests.
“Please pass my thanks on to all at MCC for last night – great for Melody Macs to be part of such a fabulous event.” – Carol Donaldson

An Evening With Manchester Community Choir and Friends

On Friday March 14th 2014 Manchester Community Choir (and friends) took part in a fundraiser for Freedom From Torture.

“Still buzzing from last night. What a fantastic evening, thanks to inspirational conducting and outstanding impresario/organising!” Caroline

“As a member of the audience, I was so very impressed by your performance and hope to see you all sing again soon. Brilliant!” Kylie

“Lovely singing and playing, and a tasty piece of coffee cake!” Jude

The fundraiser was organised by Olayinka’s campaign supported by

RAPAR – working together to achieve equal human rights. Please see www.rapar.org.uk for more information and how to help.

“a HUGE THANK YOU for your time, effort and lovely performance yesterday afternoon at Olayinka’s benefit. It was a good event in general I thought and the choir sang really well – a number of people commented on how good we were. I felt very proud of us.” Ruth