Singing our festive songs under the Christmas Tree with reindeer outside

The Foundation for Peace was set up after the Warrington bomb in 1993 which killed Tim Parry and Johnathan Ball and injured 57 other people. It was set up by Colin and Wendy Parry and it now works nationally and internationally on conflict resolution, with victims of terrorism, to tackle racism and to support the emergency services.
The Christmas Fayre was a fundraising event, and also an opportunity to tell people about the work of the Peace Centre.
The choir sang at around 11am and again at around 12 noon.

OUR EVENING WITH OUR NORWEGIAN FRIENDS COR MIO! 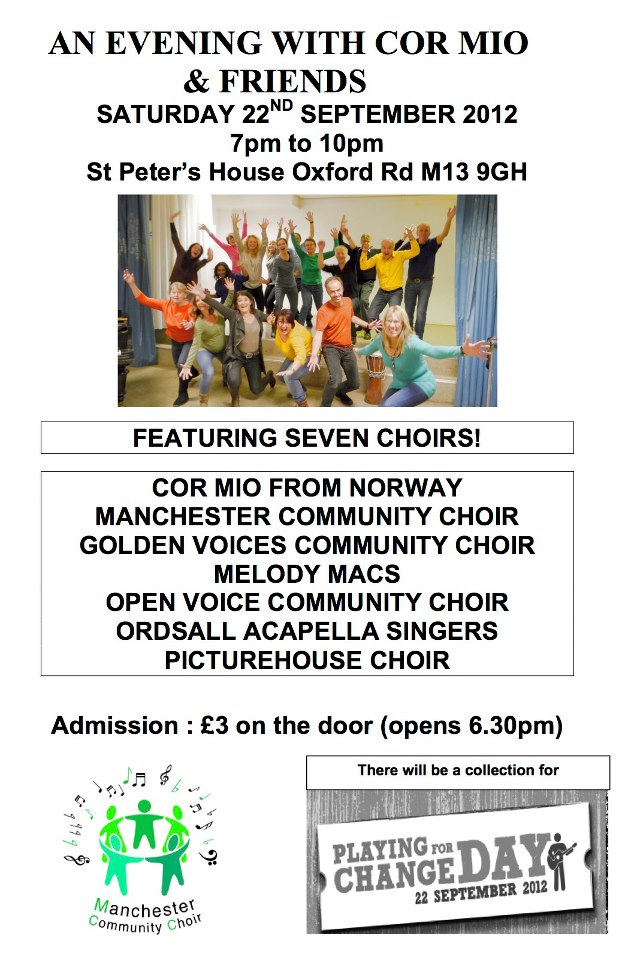 “Thank you for the great concert and for arranging such wonderful stay for all of us in Cor Mio. Hope to see you all again some time. Tove”

“You’re great! Thank you again for everything you did for us in Manchester. We will never forget neither you, the buffet or the concert. Warm regards from Monika”

An Evening With Cor Mio And Friends September 2012, a set on Flickr.

Mass sing, busking and a concert at the National Street Choir Festival

at The Peoples History Museum

The organisers of the Adult Learners event at the Peoples History Museum and from the Chorlton Arts Festival have given us excellent feedback and praised us highly on our performances. ‘Brilliant’.’Fabulous’ Wonderful’ We have also gained new members from both events!

Action for Sustainable Living have a writeup of the event