Listen to us singing some of our festive winter songs, as recorded by Joseph McGarraghy 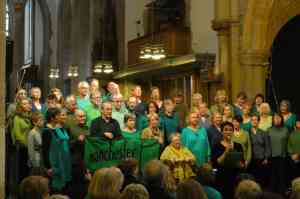 led by Sakhioba, a fourteen-piece male-voice choir from the Republic of Georgia. The ensemble,
founded in 2006, is directed by Malkhaz Erkvanidze, the leading authority in the
post-Soviet revival of ancient Georgian church chant and founder of the renowned Anchiskati Choir.

Wednesday, 26 October 2011 Ceilidh with a difference

we helped to celebrate alto Margaret’s forthcoming wedding, by singing at the Band On The Wall.