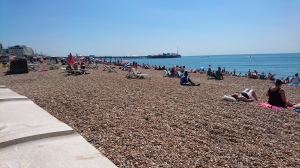 It’s a long way from Manchester to Brighton but on a coach full of singers from Open Voice (and Kadenza and Bury AcaPeelers) as well as MCC the atmosphere was warm and friendly (although pleasantly air-conditioned in the June heatwave) and driver Garry did a great job in often heavy traffic. The M25 jams meant we could admire the undercarriages of planes coming in low on their approach to Heathrow, while on the M40 I was counting buzzards and red kites. 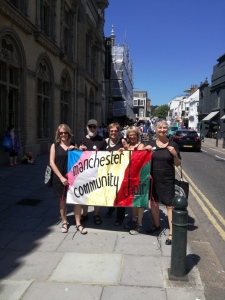 After a long seven and a half hours we were deposited at The Dome Brighton where the extremely well-organised registration process meant it took no time to collect wrist band, bag and T-shirt.

Once I’d found my hotel, met up with friends, and had something to eat at one of the thousands of excellent restaurants, there was only time to catch a few of the acts and choirs at the Friday night concert. Cor Gorbath’s first song was about Gaza, very moving, while their second was about Faslane. Gin and Harmonics’ rendition of Joan Armatrading’s The weakness in me, and Joe Jackson’s Is she really going out with him, was unforgettable. Barnstormer 1649 sang an energetic punk version of The diggers, on which high point I left for my bed. 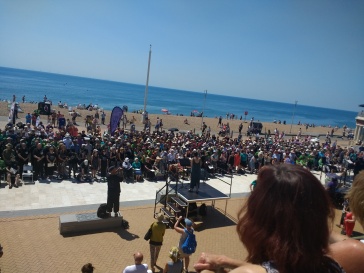 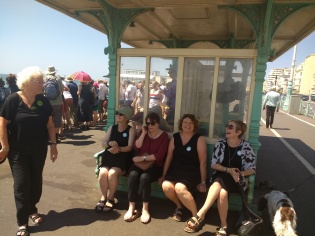 The massed sing rehearsal on Saturday morning in The Dome was a steep learning curve but the 5 composers on stage did a great job. It was a very hot walk down to the blazing sun-drenched West Pier for the massed sing itself. The sea shanty like Citizens of the world by Boff Whalley went down well. The other songs were When the sun rises by Penny Stone, Ye are many they are few (based on Shelley’s The masque of anarchy) by Kirsty Martin, Ali Burns’ Still I rise, Nasty by Val Regan, and the moving song Human written by inmates of the Verne Immigration Removal centre in Portland, Dorset. Finally a Street Choirs traditional rendition of Billy Bragg’s The Internationale. 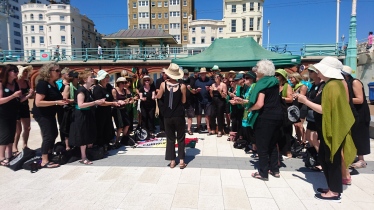 MCC’s two busking slots started at the West Pier with several favourites – Come the time, Sing John Bull, Saltwater and You’re the voice. There was enough of a break before the next slot in Jubilee Square (in the shade) to cool down and rest. At the second busk we had the chance to run through the two songs for the evening concert, People get ready and Something inside so strong, which gave us a lot more confidence and was a real boost.

Six of us then made our way to the beach for a much needed cooling dip in the sea. Thanks must go to confident outdoor swimmers Dorothy and Alison for organising us, and to Cathy for looking after our kit.

The Saturday evening concert was an amazingly diverse and rich display of talent from all the choirs. The beach party got back in time to catch the fantastic Out Aloud from Sheffield. Stand-out choirs from the rest of the concert for me included Protest in Harmony, all the way from Edinburgh singing about
Faslane; The Pales Peace Choir, who sung Quaker-based songs; Bury AcaPeelers, all in stripey tops, singing Dignity by Deacon Blue; Manchester colleagues Open Voice with a very moving song by Boff Whalley, Three boats about the thousands of refugees who have drowned trying to reach safety; Commoners Choir with their hilarious and brilliant Jeremy Hunt song; Bradford Voices’ Some walls; Whitby Community Choir, with Christy Moore’s Go, move, shift. 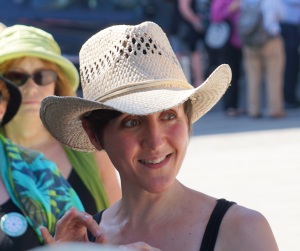 MCC’s set went very well and those hours of rehearsal, fine-tuning the two songs really paid off. The concert finished with an excellent performance by our hosts, Hullabaloo Quire. Many singers stayed on in the bar after the concert for the traditional singalong which went on till well after midnight.

The Sunday morning workshops were many, varied, and difficult to choose only two. I did Frankie Armstrong’s Finding easeful power, which worked on your whole body to 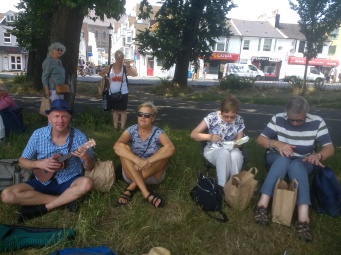 release tension and open up your voice; then the fabulous Reem Kelani’s Arabic and Palestinian singing workshop in which we learned about the traditions and history of Arabic singing; then she taught us a Palestinian folk song.

The weekend concluded with the picnic in the park, in this case the shade under the trees on The Level. I couldn’t fault my gluten free option while friends commented on the delicious couscous salad. Garry and the coach were waiting to whisk us back home after the picnic, and the return journey went without any major hold-ups. The red kites were still hovering over Oxford Services, and the front of the coach at least indulged in some community singing. My first Street Choirs and an unforgettable weekend.